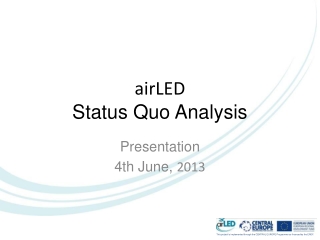 The Status Quo in the airLED airports and the challenges for future developments - . bologna 13 th february 2014 alberto

Status quo bias - . avoiding action avoiding change. our choices and our satisfaction are driven by the comparisons we

The Space Status Quo - . what the heck is a “nasa,” anyway? a lecture by chris crowe, who knows someone that works